This morning, citizens from throughout Pennsylvania came to the Capital Complex in Harrisburg to say that we want to ensure that the ballots cast in the most recent election were accurately counted.  Chants of “Count Every Vote” rang out throughout the Rotunda with people holding signs like 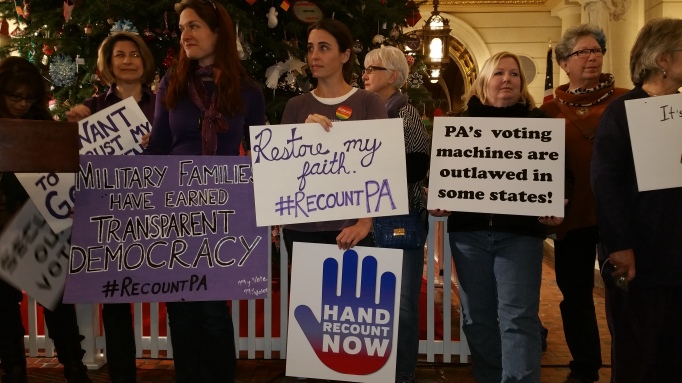 Citizens of PA calling for a recount in Pennsylvania

This rally occurred about an hour after Jill Stein announced that she was had filed suit in the U.S. District Court, Eastern District of Pennsylvania (Philadelphia).  She called Pennsylvania’s voting system a “disgrace.” Her federal complaint said, in part,

“Voters are forced to use vulnerable, hackable, antiquated technology banned in other states, then rely on the kindness of machines. There is no paper trail. Voting machines are electoral black sites: no one permits voters or candidates to examine them.”

There were five speakers at the rally.  Carl Romanelli, the 2006 Green Party Candidate for the US Senate spoke first. He discussed Jill Stein’s federal complaint, a need to have a forensic review/audit of the electronic voting machines, and a manual recount of the paper ballots in the few counties that have a paper trail.

Pat LaMarche,  the 2004 Green Party Vice-Presidential Candidate, spoke next. She blasted the PA Commonwealth Court, saying “Shame on you!” for demanding that the 100 Pennsylvania citizens  (not Stein’s campaign) put up a $1,000,000 bond for the court to hold the hearing on whether or not to recount and audit the votes in Pennsylvania.

Next up was MaryBeth Kuznick, President of VotePA. VotePA is a statewide citizen’s organization that believes in fair and open elections in Pennsylvania.  This group is leading “the fight against unverifiable paperless electronic voting and dangerous internet voting in Pennsylvania.”  She talked about her experiences as a recount monitor in the Ohio presidential recount in 2004.  She also spoke of the electronic voting machines that have either been outlawed or required to have a voter-verifiable paper trail in other states, including Ohio and California.  These very same machines, now over a decade old, are still used in most counties in Pennsylvania, BUT without any paper trail at all.

I was the next speaker.  Representing Concerned Voters of Centre County, my county’s local version of VotePA, I talked about my experiences with both the electronic voting machines (commonly called a DRE) in 2006 and my experiences with this year’s election.

Finally, Dr. Candice Hoke spoke.  She is a lawyer, cyber-security professor, and Director of the Center for Election Integrity at Cleveland State University. Hoke talked about the legal (Constitutional)  and security issues surrounding the election process in Pennsylvania. As an elections lawyer, she discussed the Constitutional mandate for a complete, open, and fair election process that doesn’t stop once you cast your ballot; it only ends once you can ensure that the vote is accurate. Then putting on her election cyber-security hat, she talked about what can and has gone wrong with the electronic “ballot boxes” we’ve been using across the country and the serious problems we have with the unverifiable DRE voting system we have in Pennsylvania.  Her bottom line was that with the lack of a statewide voter-verified paper trail, aging electronic voting and scanning machines, and the inability/refusal to do a forensic audit of the machines and voting, the results of this election are in doubt.

The arguments for a recount/audit are being made in the public arena and in the courts.

For the integrity of our voting system AND for the health of our democracy.  We now wait to see what happens next.

3 thoughts on “Rally: We Want a Recount in PA”