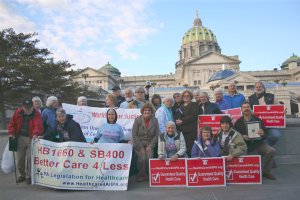 Advocates for Single Payer Healthcare Rallying in 2009 in Harrisburg, PA

Anya Schriffrin has just written a wonderful piece on universal health care from the French perspective called “The French Way of Cancer Treatment.”  She discusses the differences in the treatment her father received at Sloan Kettering Memorial Hospital v. his treatment at Cochin Hospital, a public hospital in Paris.

The differences she saw in her father’s cancer treatment in both countries included:

The one statement that stood out for me on the French system was this:

“There were other nice surprises. When my dad needed to see specialists, for example, instead of trekking around the city for appointments, he would stay in one room at Cochin Hospital, a public hospital in the 14th arrondissement where he received his weekly chemo. The specialists would all come to him. The team approach meant the nutritionist, oncologist, general practitioner and pharmacist spoke to each other and coordinated his care. As my dad said, ‘It turns out there are solutions for the all the things we put up with in New York and accept as normal [emphasis added].’“

As a cancer survivor, I can attest to similar experiences in the United States just about a quarter century ago.  Nothing has changed.  Like Ms. Schriffrin’s father, my visits to the hospital often took 7-8 hours after getting up way before the break of dawn to travel 3 hours to the hospital to be one of the first people to wait in line to see the doctors and other specialists.  I too had one doctor who wandered in to the clinic for my chemo 7-8 hours AFTER he was scheduled for treating patients. In that particular case, he kept patients and nursing staff waiting until about an hour after the clinic should have closed for the day.  And I had to fight for my life with two insurance companies in order to get the bone-marrow transplant I needed.

We can do better here in the US.  Better than what Ms. Schriffrin’s father and I have both experienced.

Let’s fix this broken US healthcare system.  Let’s create access to quality healthcare for all via a universal, single-payer healthcare program in the United States.  Check it out.  Let’s do healthcare the French Way in the American style as suggested by Congressman John Conyers Jr. (D-MI), Senator Bernie Sanders (I-VT),  PA Senator Jim Ferlo, the state of Vermont, and Health Care for All PA.