The title of this blog is “Looking for ‘Character’ in GOP Presidential Candidates.” I would add a colon to that– “: Or Lack Thereof.” I don’t want a person who lies to the public about either their record or policy. None of these GOP candidates meet my expectations.

“One of the benefits of a presidential campaign is the character and capability, judgment and temperament of every single one of us is revealed over time and under pressure.” That was Carly Fiorina’s introduction to the second GOP presidential debate on September 16, illustrating the flaws in all the GOP candidates. Even the conservative Washington Post wrote that Fiorina “couldn’t just admit she made a mistake but instead doubled down and worsened the falsehood [about Planned Parenthood.” She insists on describing a scene in the highly doctored, false videotapes of Planned Parenthood that doesn’t exist and continues to digging her hole deeper while demanding a government shutdown. The last debacle, two years ago, cost $26 billion, but she was “not aware of any hardship to anyone, other than the veterans trying to get to the World War II memorial.”

In an increasingly strident voice, Fiorina delivers graphic details about abortions from these fabricated videos

I live in a town in central Pennsylvania with a history of abolitionism and civil rights for people of color and for women. This history goes back to the early 1800’s when the Quakers first settled in what had just become known as Lamb’s Crossing and eventually Bellefonte, Pennsylvania. According to Bellefonte Secrets,

Bellefonte Pennsylvania was the first town in America where human slavery was forbidden. Even though the law of our land was still that people who were slaves, and were identified as such, were to be returned to their owners. This town did not break any laws even though the slaves, or former slaves, in Bellefonte had no fear of being sent back.

As a result of this early anti-slavery movement in Centre County, Bellefonte became a home for former slaves and freemen. And a community grew up and around a Black church community that became known as the Saint Paul AME (African Methodist Episcopal) Church. It is a church associated with the Underground Railroad during the Civil War and with the Mills Brothers and their family during the early part of the 20th Century.

According to RootsWeb, Saint Paul’s AME Church was established in 1859 through the merger of two other religious houses. The first house was originally founded in 1836 by Samuel Johnson of Chambersburg, Pa. It was known as Zion’s Wesleyan A.M.E. church. The second one was created in 1844 by the Rev. Willis Nazery and was known as the A.M.E. congregation. In 1859 these two merged; they built a church on land donated by a Quaker named William Thomas.

This church has had several leaders, including William Hutchison Mills, the grandfather of the Mills’ Brothers Barbershop Quartet, the folk, jazz, and gospel singing group famous throughout the mid- and late 20th Century. Here’s a bit of history about the anti-slavery movements, Bellefonte, and the Mills Brothers…

With its Quaker roots, Bellefonte has long been a place where people of different races and backgrounds could live and work side by side.  From about 1818 until the Civil War, Bellefonte was a stop on the Underground Railroad and several homes [as well as St. Paul’s AME Church] in the town have now been identified as being former safe houses for runaway slaves.  In the late 1820’s, the ancestors of the Mills family escaped slavery in the South on the Underground Railroad.  Upon arriving in Bellefonte, they decided to stay rather than continue on to Canada.  Of their four sons, Lewis and Edward Mills, joined the Union Army’s Colored Troops and fought in the Civil War.  Lewis’ son, William Hutchinson Mills (b. 1847, d. 1931) was to become the singing Mills Brothers’ grandfather.

William Hutchinson Mills became a barber in Bellefonte in 1871.  In 19th Century northern cities, the barber trade was historically delegated to African-Americans.  In fact, we’ve read that Bellefonte did not have a white barber until sometime after 1880.  Thus William H. Mills began a barbershop at 215 W. High Street in downtown Bellefonte that continuously did business until 1931.  Due to the location of his barbershop, we can assume that William H. Mills had both white and black customers.  An April 19, 1874 reference in the Centre Democrat newspaper states, “Mr. William Mills, one of Bellefonte’s best barbers, is refitting his shop in the most tasteful manner.”

….In 1872, the great black abolitionist and orator, Frederick Douglass, visited Bellefonte to speak at a fundraiser.  While there, he had his hair cut by Williams H. Mills.  Douglass was, perhaps, the inspiration for William H. Mills and the other officers of St. Paul’s AME Church to persuade the Bellefonte school board to integrate their schools, in 1885.

This history of concern for civil rights and music continues to the present. The current pastor of Saint Paul’s is Dr. Donna King; she is an Instructor in Black History and Women’s Studies at Penn State University and is a visiting researcher at the Dickinson School of Law who describes herself as an activist.

Saint Paul’s church is now, however, in serious disrepair and needs some help and tender-loving care. Our community – both members of the church and community members at large – are now pulling together to save both the congregation and this historic building. The heating system needs to be replaced. Oil needs to be purchased for the winter. Leaks in the roofing need to be repaired. The stained glass has some broken spots that need to be fixed. And that’s what I could either see or heard about; I assume there is much more.

Band Burrage holds a benefit concert that includes music by the Blues Brothers at Saint Paul’s AME Church in Bellefonte, PA. This shows the south side of the church’s interior. 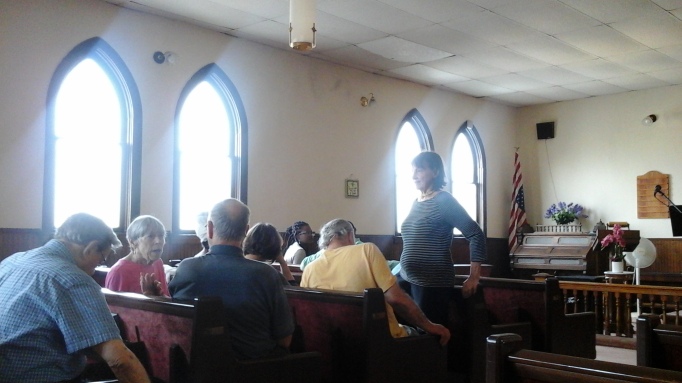 Members of the Bellefonte, PA community gathering inside Saint Paul’s AME Church for a benefit concert to help restore the church. This shows the east side of the church.

Showing financial community support will help obtain necessary historic grant funding to fully restore this historic gem. So on Saturday, September 26, a fundraising afternoon was held. A silent auction was held along with the serving of a soul-food luncheon. But the big event was a free concert by Band Burrage paying tribute to The Mills Brothers; his group was joined by a gospel group from Penn State University. This concert helped bring in many community members to see the church to see and hear about its history associated with the Civil War civil rights and equality.

I attended the concert and taped it so that you could get both a feel for the church interior as well as the music in our community.

Here are the three videos that I made.  If you are so inclined, please help our community save this historic civil rights and musical heritage landmark. Donations can be made at gofundme.com/stpaulbellefonte.

Once again, donations to help preserve this piece of history can be made at gofundme.com/stpaulbellefonte. Thank you!