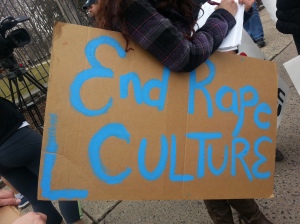 What we need to do to reduce/eliminate sexual assault, stalking, and harassment in our community.

I live close Penn State University where the Kappa Delta Rho fraternity’s online cyber bullying activities using Facebook to show explicit pictures of nude and/or inebriated women occurred. As a result of this action and the now ongoing investigations by both Penn State University and the State College Police, Erin Matson’s idea of reducing the legal age for alcohol consumption might be something that states might want to consider. I don’t know where I stand on this, but Erin does make a decent argument here.

I understand that the PA legislature may now revisit this bill to expand the law to cover such types of bullying activities outside of an intimate relationship as a result of the KDR incident. When they do, I would recommend that they expand the law to all forms of cyber bullying and stalking in addition to any non-consensual dissemination of such images. This would include severe harassment and bullying threats that place a person in reasonable fear of death or serious bodily injury.

This proposal would, I believe, help create a state-based law similar to federal law (18 U.S.C. 875 and 18 U.S.C. 2261a) that “ makes it a federal crime to transmit threats of bodily injury in interstate commerce and criminalizes the use of electronic communication to place a person in reasonable fear of death or serious bodily injury.”

Finally, there will be a Congressional hearing on on-line cyber-bullying and stalking on April 15. This hearing is being set up by Representative Katherine Clark (D-MA) with the assistance of the National Coalition Against Domestic Violence. This hearing will focus on concerns about gender violence in all forms of social media. I’ll post a comment here once I find out where and at what time the hearing will be held.