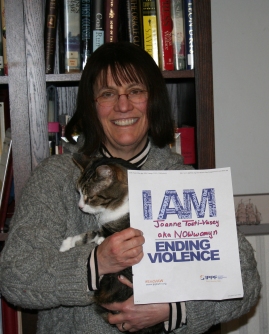 The following is a guest blog originally published here by Jerin Arifa, with an acknowledgement to Patricia Reuss for staying on top of this issue and sending the report to us.

Jerin serves with me on the board of directors for the National Organization for Women (NOW) and chairs NOW’s Young Feminist Task Force.

Patricia is the “godmother” of the Violence Against Women Act (VAWA), having worked very closely with now Vice-President Joe Biden when he authored the original VAWA back in 1994.  She describes herself as “a longtime women’s rights activist pretending to be retired and currently serving as a policy adviser to NOW and the National Task Force [to End Sexual and Domestic Violence Against Women].”

Earlier this year, Pat wrote a guest blog for me on the Violence Against Women Act. It focused on a watered-down version of VAWA introduced by Republican legislators that fortunately failed and was replaced by a strong re-authorization bill signed into law by President Obama on Women’s Equality Day last March. Thank you Pat for all you do for women’s lives.

The Violence Policy Center has released their annual report, When Men Murder Women, in advance of Domestic Violence Awareness Month. The study reports the statistics for females murdered by males, and includes a list of the top ten states with the highest homicide rates.