People throughout the United States gathered in communities and cities around the country to protest the separation and detention of asylum-seeking families. The largest one was held in Washington, DC.  The one I attended was on the other side of the country at one of the Federal Detention Centers where adults, but not their children, have been sent to.  This detention center is located just south of the Seattle-Tacoma (SeaTac) International Airport.  Thousands of people came out to protest the US Department of Justice’s “Zero Tolerance” policy of separating children from their parents when the parents attempt to cross our borders seeking asylum.

People were passionate and peaceful. The following shows our thoughts in pictures and words.  I posted some of these pictures on Instagram, Twitter, and Facebook.  My thoughts were attached to those pictures. The rest I believe speak for themselves.  Here’s my photo gallery of the day.

Heading to the Rally

Due to the expected crowds and lack of parking near the Federal Detention Center, we parked at the north end of Seattle at the University of Washington. This is the northern terminus of the Seattle Light Rail line.  Angle Lake is the southern terminus of the the rail line and is located about 2 blocks from the detention center.

Selfie of my twin sister and myself on the Seattle Light Rail heading to the #BringFamiliesTogetherMarch at Angle Lake south of SeaTac, WA.

The light rail train we were on had standing room only when we arrived.

The Federal Detention Center at Angle Lake just south of SeaTac, WA. This ominous structure with the slit-like windows was what loomed over us as we stepped off the train.

There were police everywhere but the road was open. People kept coming; the crowd continued to grow. Several times the speakers asked people to “slowly move forward and south” so that more people could enter the area. By the time we left we could see why…

They were everywhere. At the train station. Standing on the street. In their cars. On the rooftops. All in uniform.  I didn’t “see” any in the crowd within the rally site, but I did assume they were there in civilian clothing.

Vehicles in a cordoned-off lot next to train station. I assumed some of these were part of the police prescence

It was a bit overwhelming.  My thoughts about the police presence were expressed with this photo: 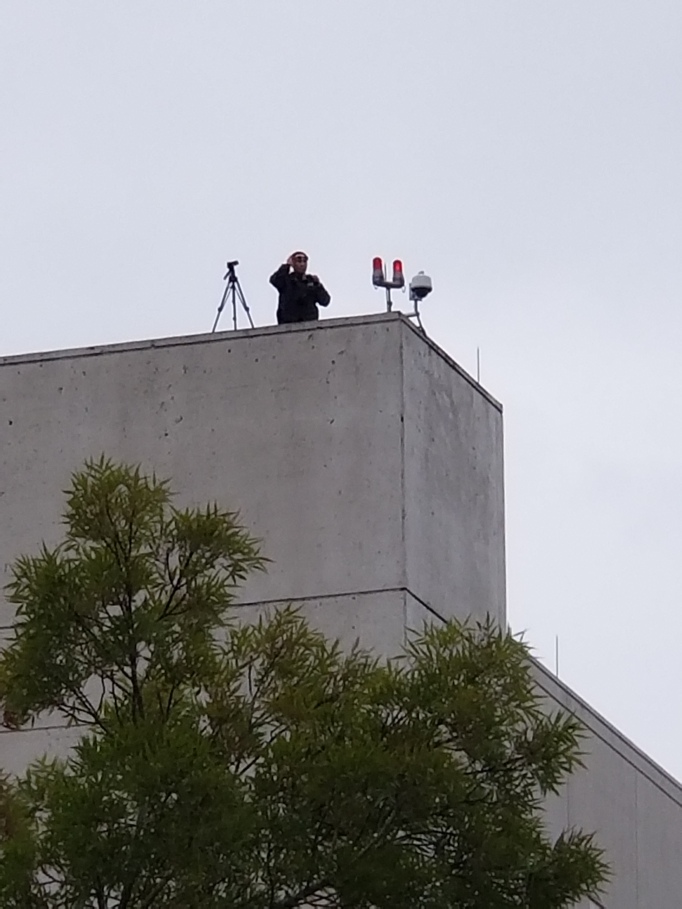 Is this what we have come to here in the US?! Asylum is a human right. SHAME! #enddetentionnow #KeepFamilesTogether – at Federal Detention Center (as posted on my twitter feed).

Only about a 1,000 people had been expected to show up for the rally. Yet, we came in droves.  According to Sgt. Cindy Sampson, spokesperson for the King County Sheriff’s Office, police estimated that there were around 10,000 demonstrators.  She told the Seattle Times that we we showed up for a highly emotional, but peaceful, demonstration full of strollers, grandmothers and a small contingent from the Puget Sound John Brown Gun Club.”  [This Gun Club, according to the Seattle Times, is an “anti-racist, anti-fascist organization, standing in opposition to organized white supremacists and attacks on people from vulnerable communities”]

What We Had to Say

According to NPR, between May and June 19, 2018, a estimated total 2,342 immigrant children have been separated from their parents. These children are scattered across 17 states. And their parents have been scattered elsewhere.  One of these separated families is known to be detained at the Federal Detention Center in SeaTac where we demonstrated. According to the New York Times, Jelsin Padilla is being held in New York City. His mom, Yolany Padilla, is being detained at the Federal Detention Center in Washington State.  She hasn’t seen her son in over a month.

Ms. Padilla is one of over 200 immigrants —174 are women — detained as of June 19 in Washington state.  We came by the thousands to say “no more; this incarceration and separation of families must end and end now!

Here’s the postcard letter I wrote to Senator Bob Casey (D-PA) calling upon him to use his powers in the Senate to end these torturous incarcerations and separations of families: 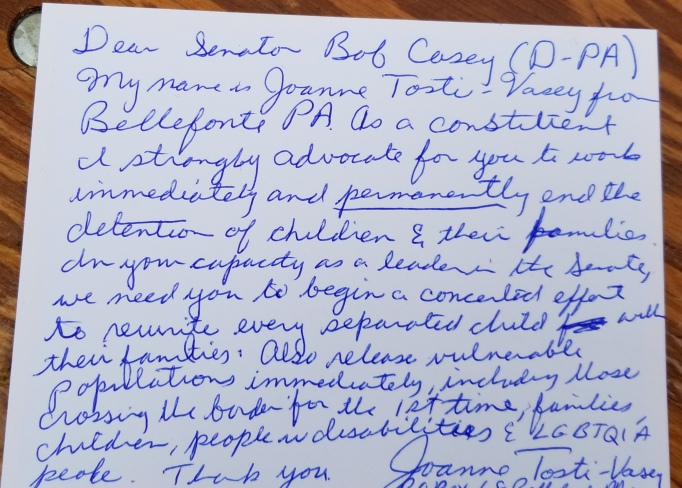 Letter to Senator Bob Casey calling for the permanent ending of the detention of children and their family members. This postcard letter was written onsite at the Federal Detention Center and will be hand-delivered to Senator Casey’s office by an organization called #FreedomForFamilies.

Many, many others wrote similar messages:

Activists sending out messages to their federal legislators calling for immediate efforts to end family separations of immigrants.

And so that you can see what else was said, the following pictures and social ,media postings will give you a flavor of our outrage. 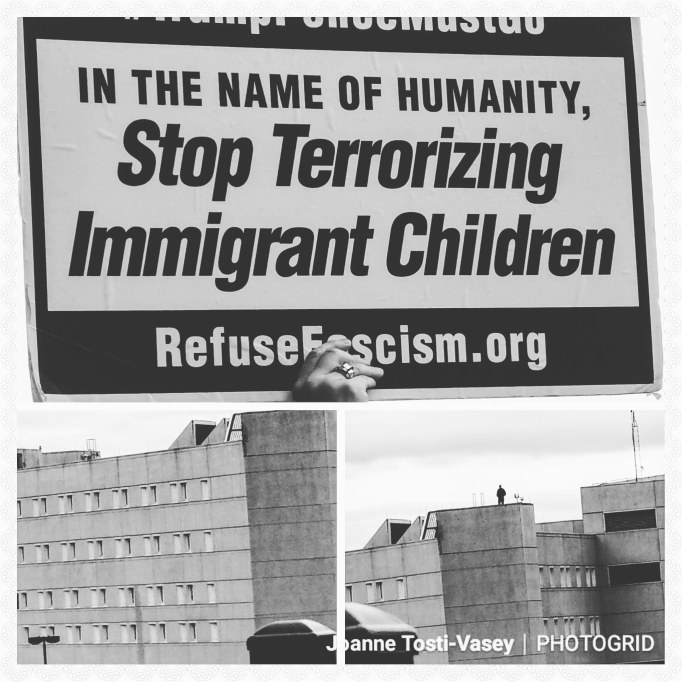 tostivasey This little girl and her mother and sister say it all, “Keep Family Together.” Separating immigrant kids from their parents and other family members is a criminal act. #enddetentionnow #keepfamiliestogether❤

tostivasey #WhereAreTheBabies?! The shoes of the babies need to be put on their feet by their mothers and fathers and their sisters and brothers. Babies are innocent kids and should NEVER be used as pawns. #enddetentionnow #bringfamiliestogether

tostivasey Separating Children from their families is nothing less than #ChildAbuse and #torture. Call your representatives, Senators, @jeffsessions212, #DHS, & @realdonaldtrump. Ask them #wherearethebabies And Tell them to #enddetentionnow #bringfamiliestogether.

John LewisVerified account @repjohnlewis
We are sick and tired of seeing little babies taken from their mothers. That’s not right, it’s not fair, and history will not be kind to us. As a nation and as a people we can do much better. We may have to turn America upside down to turn it right-side up. #KeepFamiliesTogether
1:28 PM – 30 Jun 2018 from Seattle, WA

@tostivasey “Give me your tired, your poor, your huddled masses yearning to be free.” No more separation and detention. #bringfamiliestogether#EndDetentionNow!

Quote from New Colossus (aka the Statue of Liberty) with the words that are engraved at the base of the statue. My previous blog on Lady Liberty is about immigration as well.

Picture of two Native Americans protesting the separation of families. 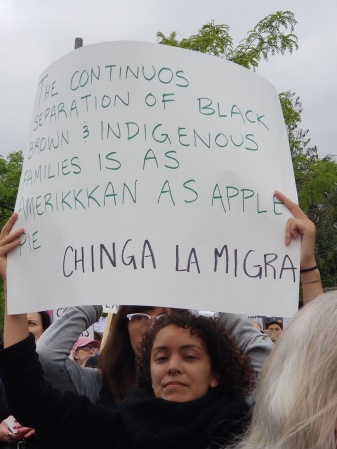 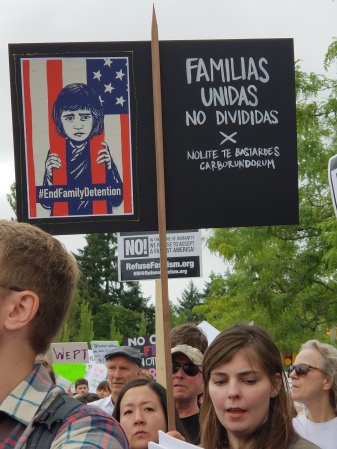 picture of a child wearing aluminum foil with a sign saying that the statement “Fake News! No Immigration Crisis!”

Sign saying “Torturing Children does NOT make this country GREAT!” 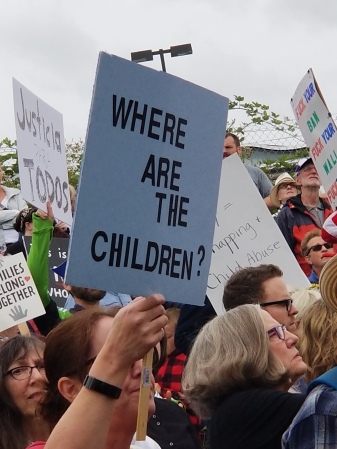 Sign saying, “The time is always right to do what is right.”

What Should Be Done to End this Outrage 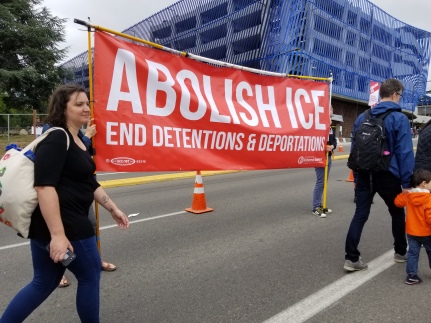 NOW IT’S Your turn! If you are in the Seattle Area, here’s some additional actions you can take this week:

If you’re elsewhere in the country, do as the sign says above and call

Lady Liberty. A symbol of freedom and welcoming. We so need to have a government that stands up for these welcoming ideals as expressed by Emma Lazarus in her poem “The New Colossus.”

For those that are interested, The New Colossus is a bit longer than the “Give me your tired, your poor, Your huddled masses yearning to breathe free,…” part that is oft quoted. These words occur at the end of the poem. The bronze plaque titled “The New Colossus” is attached to the base of Lady Liberty states and says, in full:

Not like the brazen giant of Greek fame,
With conquering limbs astride from land to land;
Here at our sea-washed, sunset gates shall stand
A mighty woman with a torch, whose flame
Is the imprisoned lightning, and her name
Mother of Exiles. From her beacon-hand
Glows world-wide welcome; her mild eyes command
The air-bridged harbor that twin cities frame.
“Keep, ancient lands, your storied pomp!” cries she
With silent lips. “Give me your tired, your poor,
Your huddled masses yearning to breathe free,
The wretched refuse of your teeming shore.
Send these, the homeless, tempest-tost to me,
I lift my lamp beside the golden door!

For a fuller history of immigration’s connection to Lady Liberty, check out my blog post from earlier this year: “The Statue of Liberty is an Egyptian Woman.“