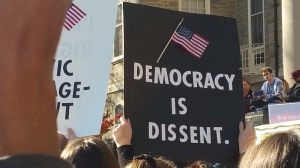 As promised, I am once again reblogging Jennifer Hofman’s weekly “To Do” list.  This week’s actions focus on more Cabinet-level nominees. These include

So read on, make your calls, and enjoy the good news.

The intention of this weekly document is to make clear suggestions for action backed with well-considered research. Although these actions are intended to be helpful, they are still subject to human error. Please do your own research!

The most important thing this week: Senate confirmation hearings

This is a second dense action list in a row, but I promise you a ton of good news at the end as your reward.

In yet another unprecedented action, most of djt’s cabinet appointment hearings are stacked together starting Tuesday this week. Some will have hearings without a completed ethics review from the Office of Government Ethics. Even if you don’t think this is evasive and creepy, this schedule will make it hard for the OGE, the press, and the American public to understand who the new cabinet leaders are and assess their conflicts of interest.

What you can do is put pressure on the Senate committees so they know we’re paying attention.Yes, making calls can be stressful, but it’s working. Staffers are telling us they’re hearing from lots of people. Never underestimate the power of your voice.

Edited: If you oppose djt skipping the ethics process for the first time in four decades, go to Wall of Us for very clear instructions on how to protest this creepiness.

Here’s their link (and I suggest following them too!) Today (Sunday) Senate Majority Leader Mitch McConnell said no votes would be permitted until ethics paperwork is filed. It is good new, however, depending on when they’re filed, it doesn’t allow committees review the materials before hearings (the way Obama’s administration did eight years ago).

For each cabinet appointee you feel is unfit to serve, take two specific actions:

Note: Do leave a message if you get voicemail or call after hours/weekend.

Script: I am calling Sen ____ in his role as the Chair/ranking member of the Senate Banking, Housing and Urban Affairs Committee. I would like him to know I oppose Ben Carson for HUD Secretary. I’m concerned about Carson’s lack of experience and opposition to this department. (source)

Script: I am calling Sen ____ in his/her role as the Chair/ranking member of the Senate Homeland Security Committee. I would like him/her to know I oppose General John Kelly for Secretary of Homeland Security. Not because he is unqualified, but I oppose militarizing the US cabinet. (source source)

Script: I am calling Sen ____ in his role as the Chair/ranking member of the Senate Environment and Public Works Committee. I would like him to know I oppose Scott Pruitt for EPA Administrator. I’m concerned about his climate denial, anti-EPA lawsuit, and ties to the energy industry. (source)

Script: I am calling Sen ____ in her role as the Chair/ranking member of the Senate Energy Committee. I would like her to know I oppose Rick Perry for Energy Secretary. I’m concerned about his ties to oil, climate denial, and history of opposition to this agency. (source)

Only three more! You can do it!

Script: I am calling Sen ____ in his role as the Chair/ranking member of the Senate Energy Committee. I would like him to know I oppose Wilbur Ross for Commerce Secretary. I’m concerned about his deep financial ties to Russia. (source)

Script: I am calling Sen ____ in his role as the Chair/ranking member of the Senate Armed Services Committee. I would like him to know I oppose General James Mattis for Secretary of Homeland Security. He may be qualified, but we at a dangerous precedent when militarizing civilian cabinet posts. (source source)

Script: I am calling Sen ____ in his role as the chair/vice chair of the Senate Select Committee on Intelligence. I would like him to know I oppose Mike Pompeo for CIA director. I’m concerned about someone who supports government surveillance, torture, and religious oppression leading this vital agency. (source)

Last week’s email had seven additional cabinet appointees to oppose–some of whom will have a hearing this week. If you haven’t yet called to oppose them, here’s the link to last week’s document.

You did it! Here’s your reward: news of actual humans being kind, supporting each other, and standing up for what’s right. We are still a fantastic, diverse country (in case you needed a reminder).

TOLD you there was good news!

One thought on “What to Do This Week of Jan 8, 2017: Actions for Democrats, Independents, & Republicans of Conscience”