In September 2011, just before I stepped down as Pennsylvania NOW President, PA NOW along with the Feminist Majority, Legal Momentum, and several other feminist organizations signed onto an amicus brief written by the Women’s Law Project in support of two middle school girls from the Easton Area (PA) School District who participated in a youth breast cancer awareness program by wearing “I ♥ boobies” breast cancer awareness bracelets to school. 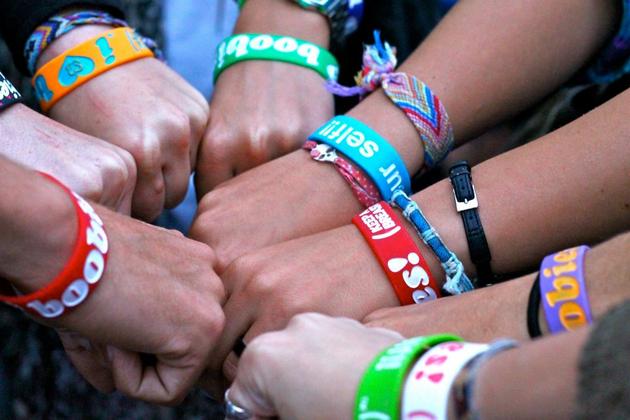 Sample “I ♥ Boobies” bracelets that were banned by the Easton Area School District; photo courtesy of Keep a Breast Foundation

Kayla Martinez and Brianna Hawk, then seventh and eighth graders, were suspended for wearing Keep A Breast bracelets on Breast Cancer Awareness Day.  Subsequently the school district instituted a district wide ban on the bracelets because they were supposedly “lewd” statements about women’s bodies.  These young women, citing 1st Amendment rights, refused to take them off and then filed suit through their parents after the district-wide ban was instituted.

On August 5, 2013, the 14-member 3rd Circuit Court of Appeals, in a 9-5 en banc decision, upheld the District Court injunction against this ban on educational free speech.  They looked at the question of whether or not speech about women’s bodies and their health “could [be] interpret[ed] as lewd, vulgar, profane, or offensive [when that] speech could also plausibly be interpreted as commenting on a political or social issue.”  The court decided that breast cancer is a social issue exception and thus protected speech.  This means that talk about breasts and breast cancer is protected speech in schools throughout Pennsylvania, Delaware, and New Jersey, the three states that fall under the jurisdiction of the 3rd Circuit Court of Appeals.

According to the Keep A Breast Foundation, the makers of this bracelet, the 3rd Circuit Courts decision

“[M]arks the first time a federal court of appeals has ruled that the First Amendment protects student speech that is plausibly understood as commenting on political or social issues.”

The Court’s bottom-line statement in its en banc decision, I believe, says it all:

“The bracelets are intended to be and they can reasonably be viewed as speech designed to raise awareness of breast cancer and to reduce stigma associated with openly discussing breast health.”

Thanks to Mary Catherine Roper of the ACLU of Pennsylvania  for taking this case to the 3rd Circuit and to Terry Fromson and staff of the Women’s Law Project for working on this issue in support of young women’s free speech rights when talking and taking a stand on their bodies and their health!