A great summary of what’s happened in Texas and Washington, DC today. Like my blog on Senator Wendy Davis this morning, Nel’s New Day highlights two successes within 24 hours – one for women and one of all loving, committed same-sex couples who have had their relationships legally recognized as marriage in now 13 states as well as several countries around the world (since the US Government recognizes marriages that are conducted as a legal marriage in a different country). This has been a day of celebration in the War on Women and against homophobia. THANKS to everyone who made this happen.

Forty years ago, homosexuals were mentally ill. Ten years ago gays and lesbians were criminals. Today LGBT people can legally marry the people they love. Yesterday was the day that my partner and I celebrate as our anniversary because marriage equality is illegal in Oregon. It was our 44th anniversary. Without the same Social Security benefits that legally married people receive, my partner has lost well over $100,000. We don’t know how much we have lost in other benefits because of the discrimination against same-sex couples.

The Stonewall riots, hailed as the dawning of the gay rights movement, started in New York’s Greenwich Village on June 29, 1963, also 44 years ago. But today is a new day because the U.S. Supreme Court overturned the 1996 federal statute defining marriage as between one woman and one man.

Listening to the U.S. Supreme Court as they dribbled out their rulings…

Late last night, I reblogged a bio of Texas Senator Wendy Davis.  She is the woman who filibustered Texas’s proposed TRAP law – SB 5.  This bill would have contained several burdensome restrictions on a woman’s constitutional right to seek a safe, legal abortion, including:

Along with over 180,000 people, I watched in real-time the YouTube streaming of the filibuster, parliamentary procedures, and the eruption of voices in the gallery until 1 am Central time (2 am my time here in Pennsylvania) when the YouTube feed was shut down.

NPR has a good report on what happened.

Apparently votes are electronically recorded and time stamped into the legislative journal.  Reporters took pictures of these records immediately after the vote.  The initial record had a time stamp of “June 26, 2013,” which was after the constitutionally mandated shut-down of a special legislative session.

Then a few minutes later, the time stamp mysteriously changed from “June 26, 2013” to “June 25, 2013.” Republicans allegedly changed the time stamp for the SB5 abortion bill vote. Behold the magic from Becca Aarronson, reporter at the Texas Tribune that shows this doctored document.

Texas legislative journal on SB 5 before and after someone doctored the time stamp.

So why did the Lt. Governor and the radical right-wing concede?  Because of the excellent work of reporters in Texas who were able to show that the recorded vote occurred after midnight.

There was chaos on the floor and outrage when the Lieutenant Governor said that the bill had passed before the midnight deadline.  The Democrats continued to contest the Lt. Governor’s ruling, noting that the voting ended after midnight.  Which was documented  by the automatic time stamp and noticed by the press.

Because the vote actually occurred at 12:02 am on Wednesday rather than before the Tuesday midnight deadline, the Republicans finally conceded that they had lost this fight a little after 4 am Central time when Texas Lt. Gov. David Dewhurst said,

“Regrettably, the constitutional time for the first called session of the 83rd Legislature has expired. Senate Bill 5 cannot be signed in the presence of the Senate at this time. Therefore, it cannot be enrolled. It’s been fun, but seeya soon.

Thank you everyone, especially Senators Wendy Davis (D-Fort Worth) for her filibuster and Senator John Whitmire (D-Houston) for his knowledge of parliamentary procedures.  They helped create this much-needed victory on the war on women in Texas.

Meanwhile, I hope there is an investigation of this attempted tampering of the record in order to circumvent Texas’ Constitution!

And here’s my thank you to Senator Davis: 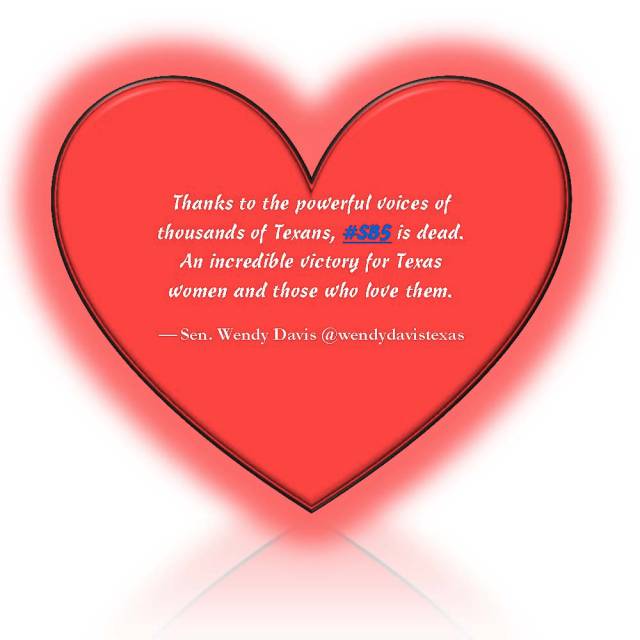 My home-made meme to express my heartfelt thanks for Senator Davis’ successful filibustering.